Short Excerpt REVIVING IZABEL (In the Company of Killers #2) 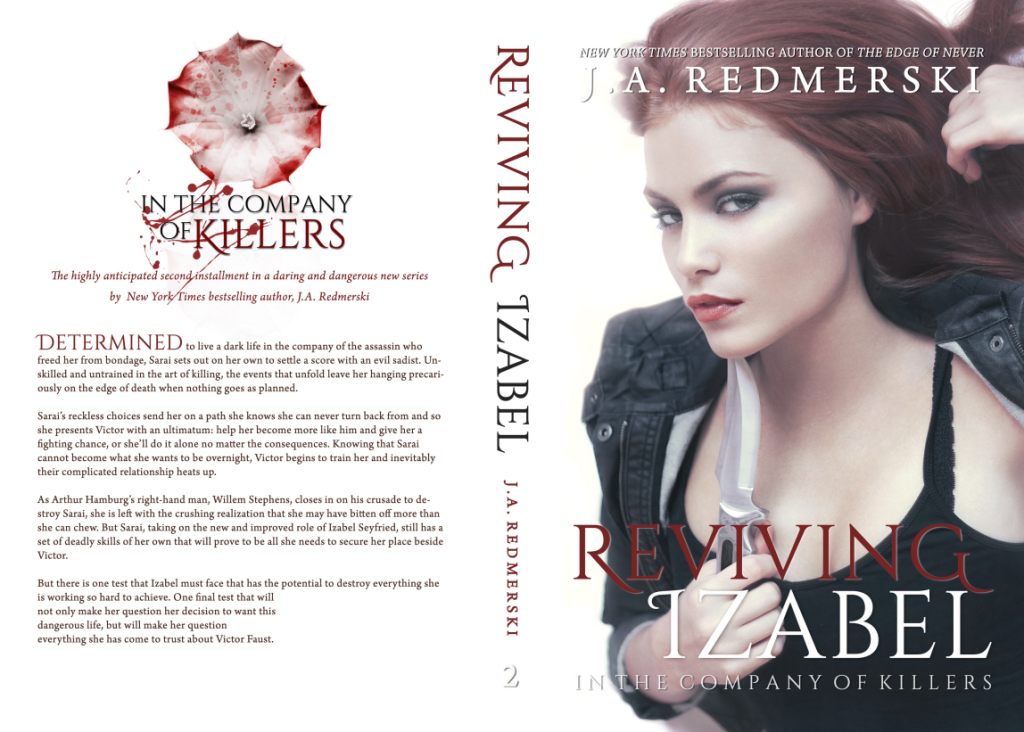 “Can’t trust anybody,” I say, looking at nothing.

“No, you can’t,” Victor says and I look up, detecting a hidden meaning behind his words. “Now maybe you can understand why I don’t get close to anyone. It’s not just the job, Sarai, people generally cannot be trusted. Especially in my profession where trust is such a rarity that it’s not worth wasting the time and effort searching for it.”

“But you seem to trust Fredrik,” I point out, looking up at him from the couch. “Why’d you bring me here, of all places? Didn’t you learn your lesson with Samantha?”

His expression darkens, stung by my accusation.

“I never said I trusted Fredrik. That is still up in the air. But right now, Fredrik is my only connection inside the Order and for the past seven months he has done nothing to indicate he is untrustworthy. Quite the opposite, he’s done everything to prove that he is.”

“No, you’re right, but soon enough I’ll know one hundred percent if Fredrik can be trusted, or not.”

“Why bother? You just said that trust is so rare it’s not worth the effort.”

“You ask a lot of questions.”

“Yeah, I guess I do. And you don’t answer enough of them.”

“No, I guess I don’t.” He smiles faintly and it melts my heart into a puddle of mush.

I look away from his eyes and swallow down my feelings.

“I’m not safe here,” I say looking back up at him.

“You’re not safe anywhere,” he says. “But as long as you’re with me, nothing will happen to you.”

He raises an eyebrow.

“You’re not my hero, remember?” I remind him. “You’re not the other half of my soul who could never let anything bad ever happen to me. Trust my instincts first always, and you, if I choose, last. You said that to me once.”

“And it’s still as true today as it was then,” he says.

“Then how can you say nothing will happen to me if I’m with you?”

His expression becomes vacant as if for the first time in his life someone has rendered him speechless. I gaze across the room into his quiet and emotionless face, only his eyes revealing a trace of numbness. I get the feeling that he spoke before thinking, that he expressed something to me that he truly feels but never wanted me to know: he wants to be my ‘hero’, he will do anything and everything in his power to keep me safe, he wants me to trust him fully.

He walks back over and sits down beside me. The smell of his cologne faint as if he makes it a point to use as little as possible. It makes my head swim with need. I have longed to feel his touch again, to taste his warm lips, to let him ravage me the way he did a few nights before we last saw each other. I’ve thought of nothing but Victor for the past eight months of my life. While sleeping. Eating. Watching television. Having sex. Masturbating. Breathing. Every single thing I have done since he left me in that hospital with Dina, has been with him in mind.

“Do you think Fredrik will tell Niklas where we are?” I change the subject for fear of breaking into him too much too soon.

“I think if he was going to do that,” he says, “he would have told Niklas the little he did know about your whereabouts a long time ago and Niklas would have tried to kill you already.”

“There’s something…off about Fredrik. Don’t you sense it?”

Victor reaches up and touches my wet hair. The gesture causes my heart to speed up.

“You have a good sense of people, Sarai,” he says as his hand moves to my chin. “You’re right about Fredrik…,” the pad of his thumb brushes my bottom lip. A shiver races between my legs. “He is…shall I say…unhinged in a sense.”

My breathing picks up and I feel my lashes sweep my face when Victor’s lips fall upon mine.

“Unhinged in what way,” I ask breathily when he pulls back. With my eyes closed, I sense his scanning the curvature of my face and my lips, and I feel the breath emitting softly from his nostrils onto my face.

Every miniscule hair stands on end when his other hand pushes up my thigh and finds my naked waist underneath the shirt. His long fingers dance against the flesh of my hipbone and then rest there.

I open my eyes to see him staring back into mine.

“Is something wrong?” he asks and his mouth sweeps mine again.

“Expect what?” I feel his fingers fit behind the elastic of my panties.

My head is swimming, my stomach a fluttering, nervous ball of muscle. “This,” I answer, my eyes opening and closing. “You’re different,” I add softly.

“That’s your fault,” he says and then his lips devour mine.

He pushes my body back against the couch pillows and falls between my legs.