There’s a new Alpha in town… and he’s a Brit!

Darcy Nicole Sheridan, is 22 years-old, beautiful, single, spirited, sexy and  – spoiled. Sheknows that about herself. Raised by wealthy (and doting) parents as an only child, Darcy pretty much coasts through life until her heart was inexplicably broken by her boyfriend, Darin.

To ease the pain, Darcy flies to Belize over the holidays fully intending to wallow in self-pity and distance herself from her ex. Her pity party is short-lived however, after observing a very handsome, very intriguing man on the beach. Darcy becomes the focus of the smokin’ hot, wealthy and somewhat mysterious ‘E.J.‘

Soon she finds herself entangled with an alpha like no other…  Her world is rocked by a series of events that will forever change the course of her life, showing her what love is all about; and forcing her to come to terms with hidden sexual pleasures only one man could fulfill…

This book is intended for mature audiences.

“He omitted the fact that I looked a lot like the last woman he may actually have truly cared for. I mean, yeah, he told me that I wasn’t anything like Lacee… but what about Bianca friggin’ Templeton? And then he just walks out of my life, expecting me to never have figured it out and call him out on that kind of bullshit? Yeah… fuck that and fuck him. It’s time a woman takes him down a few pegs.”

“Careful, sweetheart.” Eli replied, as he leaned up against my bedroom dresser, “You’re starting to sound like one of those ‘Hell hath no fury like a lover scorned’ girls who sit up in their attic, planning some poor schmuck’s demise.”

I considered that for a good second, looking down at the carpet. “This isn’t about that, Eli.” I finally said. “It’s about being lied to by someone who was clearly using me as a stand-in for…what? Prolong an ended relationship? To use me as some sort of fantasy in bed, so he can fuck ‘the one that got away’?” I looked back over at him.

He shrugged. “I don’t know. And maybe it’s better that we don’t know.” He walked over to me, putting his hands on my shoulders, “I don’t get it. One minute, I could swear you love the guy; the next minute you’ve got this “evil vixen” thing going that I can’t comprehend.”

I couldn’t say anything to that. I didn’t even fully understand why I was reacting the way I was.

Eli pulled away from me, crossing his arms. “A piece of advice, Darce? When it comes fucking someone over… Don’t fuck with someone who knows how to fuck you harder.” 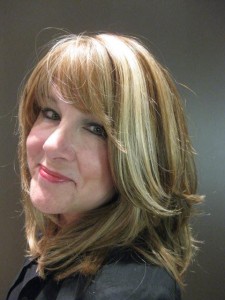 Andrea Smith is an Ohio native, currently residing in southern Ohio. Ms. Smith is the mother of two grown sons; grandmother of four. The ‘Baby Series’ trilogy is Ms. Smith’s first self-published work. Having previously been employed as an executive for a global corporation, Ms. Smith decided to leave the corporate world and pursue her life-long dream of writing fiction