For the first month of release, Last Breath will be sale-priced at $3.99.

The price will revert back to its original retail listing of $4.99.

I never really knew what misery was until the day I was kidnapped and sold for being in the wrong place at the wrong time. Two months later, I’m at a brothel in Rio when I meet Daniel Hays. He says he’s here to save me, but can I trust him? All I know of him is his sarcastic retorts and his tendency to solve every dispute with his gun. He’s also the only safe thing in my world, and I know it’s wrong to fall in love with him, but I can’t seem to help myself.  He says he’ll protect me until his last breath but I don’t know if I should believe him or even if I can.

For the last eighteen months, I’ve had one goal that has dictated every action I’ve taken. I’ve left the Army, turned paid hit man, and have befriended criminals all across the globe to find my kidnapped sister. In every brothel I raid or every human trafficking truck I stop, I hope the next face I find is my sister’s. In a hidden brothel in Rio, I find Regan Porter, bruised by not broken and still sane despite her weeks in captivity. I should leave her behind or send her home because the last thing either of us needs right now is to get involved. But with every passing minute, I find I can’t let her go. 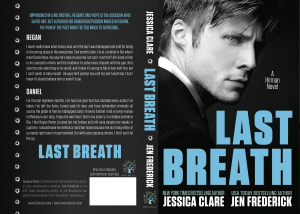 Please note: This contains some scenes that sensitive readers may find upsetting or triggering.

She’s a biter. That’s the warning given when I point to the blonde with the glazed green eyes in Senhor Gomes’ book of whores. He shakes his head and says that he has access to dozens of others that are better and all willing to engage in whatever perverse activity I want. He brags that there isn’t a sick sex act I can think of that Gomes can’t fulfill. I like home cooking, I tell him. A Texan in Rio sees a lot of beautiful Brazilian women, but sometimes you want a little star-spangled banner in the rotation.

He nods as if this makes sense to him, but I think it’s the money that I’m flashing that he understands. We walk up to the second floor and down a narrow hall toward the back, a windowless part of this brick and metal building. I can’t call it a home or even a brothel. It’s a dingy place where men with deep perversions but shallow wallets can get their rocks off.

I don’t want to have sex here, I’ve explained to Gomes. I have a thing against hellholes and having sex in them. I wave around a lot of cash, and Gomes nodded and asks no more questions.

We’re a strange parade—Gomes, me, and some house mom trailing behind. He stops at the second to last door and removes a key.

I’ve seen pictures of Regan Porter before, and not in Gomes’ look book, but nothing prepares me for her full-fledged, magazine-quality beauty. She hasn’t been eating well; her delicate bones are beginning to look sharp in places—at her shoulders, ribs, and hips. But there’s no denying her breathtaking looks. Her blonde hair is damp and small strands stick to her perfect skull. Her oval face, with its pink cheekbones and lush lips and eyebrows that look like wings, stands out like a piece of fine china at a flea market. Though she’s thin, there’s a delicious curviness in the slope of her side as it dips into the waist and flares back out to form a cuppable roundness at the hip. And those endlessly long legs.

Shit. I close my eyes and swallow. No decent man would be standing here thinking about those legs wrapped around his waist. But then again, I’m not decent. I’m no longer army sniper, Special Forces Daniel Hays who may have once been lauded as a hero for killing insurgents in Afghanistan. Now I’m Daniel Hays, mercenary who kills people for money and spends all his spare time in brothels and flesh dens like this one. Decency is a word I don’t even know the meaning to anymore.

It’s been too long since I’ve had a woman. That’s my only excuse. That and I’m becoming the monster that I’m hunting. I focus on the bruises on her knees that are scraped red and raw from time on the floor and the manacle around her ankle. Any feelings of arousal are jettisoned by the obvious signs of abuse.

Glancing sharply at Gomes, I wonder how he’s come to possess a beauty like Regan Porter. Gomes is a small-time flesh peddler, stuck up here in the slums, with a house full of females—half of which are missing their teeth or are too old or too broken.

He usually gets what the market calls second-hand goods, the girls that no other house wants. But Regan Porter is gorgeous, and while she looks a little rundown, she’s still model beautiful with big pink lips and wide green eyes.

“Nice tits,” I smirk for Gomes’ sake and her shudder of disgust only feeds into my growing belief that I’m as dirty as the flesh trader beside me. The dark edges of the world that I now inhabit are seeping into my skin like an oil slick covering an ocean. I shouldn’t want to touch her. And if I have to fuck her in front of Gomes to get her out of here—I don’t even let myself finish that thought.

There’s still life in her eyes. If she’s biting and spitting out acerbic insults, there’s spirit left in her, and I don’t want to be the one to snuff out that last flame. Her eyes convey her hate, and if she had a knife, I’d be sliced from my throat to my belly. I stare back, not because she’s fucking beautiful, but because she’s still standing. I’m not sure I would’ve been as strong. I don’t know if she sees my admiration or whether she can only interpret varying degrees of lust and degradation, but she sees something. An invisible string spools out between us and her eyes widen when it hits her like an electrical shock.

For months I’ve swum in a pool of blood and death and ugly deeds, and to hold onto my sanity and maybe my soul, I’ve told myself that saving these doves balances the scale.  For every life I take, if I save one then it’s all a wash in the end. Don’t think it’s tallied that way at St. Peter’s Gate, but that’s the lie I tell myself so I can sleep at night and look at myself in the mirror the next day. Regan Porter will either be part of my attempt at salvation or the bloody stone that etches out the words He Failed on my headstone.

I have been a contract killer since I was a boy. For years I savored the fear caused by my name, the trembling at the sight of my tattoos. The stars on my knees, the marks on my fingers, the dagger in my neck, all bespoke of danger. If you saw my eyes, it was the last vision you’d have. I have ever been the hunter, never the prey. With her, I am the mark and I am ready to lie down and let her capture me. Opening my small scarred heart to her brings out my enemies. I will carry out one last hit, but if they hurt her, I will bring the world down around their ears.

I’ve been sheltered from the outside world all my life. Homeschooled and farm-raised, I’m so naive that my best friend calls me Pollyanna. I like to believe the best in people. Nikolai is part of this new life, and he’s terrifying to me. Not because his eyes are cold or my friend warns me away from him, but because he’s the only man that has ever seen the real me beneath the awkwardness. With him, my heart is at risk..and also, my life.

I watch her through my bathroom window. I’ve placed one of my four rented chairs in here for that express purpose. I tell myself it is not creepy, as the American girls would say, because I watch everyone. But really I watch only her.

I cannot see everything. I’ve never seen her nude. I’ve never seen inside her shower. Smartly there is no window there. But I can see her bedroom and her living room and beyond that, with my scope, her kitchen. I know her schedule. When she gets up in the morning, when she returns to her apartment. If she were a mark, I could’ve killed her a dozen times over by now and been in the wind.

She throws her bag onto her bed and then lies down next to it. It takes many muscles to smile, more to frown but only a few to pull the trigger. I peer down the scope and place my crosshairs over her forehead. Puff, dead.

Jen Frederick lives with her husband, child, and one rambunctious dog.  She’s been reading stories all her life but never imagined writing one of her own. Jen loves to hear from readers so drop her a line at jensfrederick@gmail.com.

Author Jessica Claire – This is a pen name for Jill Myles.

Jill Myles has been an incurable romantic since childhood. She reads all the ‘naughty parts’ of books first, looks for a dirty joke in just about everything, and thinks to this day that the Little House on the Prairie books should have been steamier.

After devouring hundreds of paperback romances, mythology books, and archaeological tomes, she decided to write a few books of her own – stories with a wild adventure, sharp banter, and lots of super-sexy situations. She prefers her heroes alpha and half-dressed, her heroines witty, and she loves nothing more than watching them overcome adversity to fall into bed together.