Will they or won’t they? #ToxicLove

New York Times bestselling author Kim Karr turns up the heat in a smoking hot, emotionally compelling romance that takes you into the world of Manhattan’s elite. Meet Jeremy McQueen, a sexy, intense, brooding entrepreneur who goes after what he wants, and Phoebe St. Claire, a socialite-turned-CEO who’s been drifting through life searching for something she thought she’d never find again–the right man to share her future.

Phoebe St. Claire has devoted herself to saving her family’s hotel empire–but her best efforts have not been good enough. With her whole world in turmoil, the tenacious go-getter turns to the once love of her life. Far from innocent, Jeremy McQueen was the guy from the wrong side of the tracks who her parents would never have approved of. Their years apart have only made the sexy bad boy more irresistible than ever–and their reunion is explosive.

When she asks Jeremy to help her salvage her family business, he agrees immediately, with only one condition–he wants her in his bed.

But soon surprising circumstances leave Phoebe reeling. Was this fairy tale romance just too good to be true? Will Jeremy’s secrets pull them apart all over again?

THIS IS A STANDALONE SECOND-CHANCE ROMANCE WITH NO CLIFFHANGER ENDING.

This second-chance romance will have you swooning. I fell in love with Jeremy and Phoebe’s chemistry, but I had moments of frustration and doubt. Phoebe and Jeremy met one summer and quickly became hot and heavy. Things were intense and the fire that once burned never seemed to fully extinguish. Years later Jeremy and Phoebe have a run in and although there is an uncertainty between the two, their attraction to one another is undeniable, but the mistakes of their past have a way of coming back to haunt them. Can they trust one another and find a way to rebuild what was once lost or will they allow outside forces to create a wedge between them?

Toxic is my first Kim Karr read (I know, I’m ashamed!) I don’t really know what I was thinking putting off her books until now, I’ve always been interested, but I hadn’t gotten around to reading any of them yet. Let me just say, I should’ve been reading every Kim Karr book ever published and stalking her for any unpublished work. This book is hot, steamy, mucho caliente and completely addictive. The story is engaging. You will get sucked in from the very first page. I felt as though I were watching a film where flashbacks were featured to weave the pieces of the story together. I loved every minute of it. It was incredible how easily I visualized everything. (It might also be because I’m a native New Yorker that I was able to picture everything.) Either way the story grabbed my attention and held it until the very last page. I was ashamed of myself for having thrown Kim Karr books onto my TBR list without having read one. I’m sorry Kim from here on out I’m reading every release the minute I can one-click them.

I can honestly and unequivocally say Jeremy is my newest book boyfriend and shall forever remain on my list of favorite swoon worthy men. Phoebe at times frustrated me, but so did Jeremy. Although these two drove me nuts at times and I wondered which direction this story would take, I absolutely loved them together. I wasn’t certain these two would ever find a way, but I hoped they would. I could not put this book down and read it in one sitting. I laughed, I cried, I even shouted at my new fictional friends, but in the end these two taught me some very valuable lessons and made me take a look at how easy it is to allow not only your internal doubts to affect your decisions,  but the voices of all those around you. Sometimes you just have to believe in not only the love you have for one another, but in yourself. Excellent book, excellent author. I cannot wait for more books by Kim Karr. This book is definitely steamy with substance and is an absolute MUST read.  It is a perfect summer read for Contemporary Romance & Erotic Romance fans.

Feeling a bit drunk and overwhelmed with so many and so few choices at the same time, I needed some time alone and snuck off toward the beach path.

I ran toward the ocean and twirled in the sand as the wind blew around me. Once I started to feel dizzy from twirling, I still wasn’t ready to head back to the party, so I took the path that would lead me to the large Olympic-sized pool. I tugged my sandals off with thoughts of putting my feet in the water to rinse the mud and sand away. As I approached the pool, I noticed how it glowed like it was lit by small pale fires. Lost in the enchantment of it, the sudden movement beneath the surface startled me.

A fair-haired boy emerged from the water. He pulled himself up and out so quickly that I was momentarily stunned. And then when he drank me in with his eyes, I shuddered.

I couldn’t help it, the way he looked at me just made me shiver. No one had ever looked at me like that before and I found myself gazing back into his intense eyes.

He was utterly beautiful. His bare chest was sculpted but not overly bulky like Danny or Jamie. They worked out every day pumping obnoxious amounts of iron to look the way they did. In contrast, the boy standing before me had a swimmer’s build.

He stood stoic and a cautious look crossed his face. He was long and lean in a pair of bright green neon swim trunks.

Right away I could tell he didn’t care what anyone thought about him.

I loved the idea of that.

So I smiled at him.

He shook his head and his hair fell into his eyes.

I wanted to reach out and push it away. It wasn’t long, but it wasn’t short. It was perfect.

“Hey,” he said, grabbing a towel off the ground.

It didn’t belong to the club. It was small, beige, and a bit worn—not the large hunter-green fluffy ones monogrammed in white I’d always gotten when I used to come here to swim as a kid.

“Hey,” I said back, swinging my sandals nervously.

He grabbed a pair of jeans that lay next to where the towel had been and walked right by me.

I turned to watch him as he strode into one of the cabanas and dropped his trunks. I froze and squeezed my eyes shut, thinking I shouldn’t be watching him but then opened them quickly when I couldn’t resist maybe catching a glimpse.

“Didn’t your parents ever tell you it isn’t polite to stare?” His voice was low and sexy, and it tugged me out of my own head.

I put my hands on my hips. “Didn’t your parents ever teach you not to undress in mixed company?”

He pulled his jeans on and laughed. “My mother might have mentioned that once or twice but I’ve never been good at following the rules.”

And it didn’t escape my notice that he didn’t put any underwear on first.

I didn’t see anything I shouldn’t have seen, it was too dark, but something inside me electrified at the thought of seeing him naked and I stepped closer. That’s when I noticed the scuffed-up black work boots on one of the lounges with a T-shirt thrown next to them.

I raised a brow. “Is this your changing room?”

He laughed again but this time added a smile and put his hands up. “Okay you caught me. I better get out of here before anyone else does.”

He was adorable and charming and my heart skipped a beat or two.

Then I stepped even closer and entered the cabana entrance, effectively blocking his way. “Why? You’re not doing anything wrong.”

He shrugged but he didn’t try to move around me. “I usually swim in the ocean but when the water is too rough, like tonight, I come here.”

I bit my lip in contemplation before speaking. “Does it really matter if you get caught?”

He crossed his arms over his bare chest. “Let’s just say it’s not just the swimming. It’s more that I’ve been caught doing a few too many things that I shouldn’t have been doing in the past.”

The thought made my pulse thunder. “So you’re not a member at this club?”

He cleared his throat and shifted from foot to foot. “No,” he laughed but his laugh was anything but genuine. “Are you?”

I hesitated as I considered my answer. “No, I was just walking the beach and wanted to rinse my feet. I’m Phoebe,” I said extending my hand. Technically, I wasn’t lying. I wasn’t a member, my parents were. I hadn’t even been here in years. And I was out for a walk.

Amusement danced in his blue eyes. “Jeremy,” he said back.

When I chewed on my lower lip, I noticed how his eyes focused on it.

Mine focused on the entirety of his mouth—his strong, firm jaw, his sensuous lips, and his tongue that had snuck out to lick his lips.

It was almost too much. 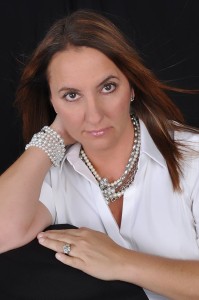 I live in Florida with my husband and four kids. I’ve always had a love for reading books and writing. Being an English major in college, I wanted to teach at the college level but that was not to be. I went on to receive an MBA and became a project manager until quitting to raise my family. I currently work part-time with my husband and full-time embracing one of my biggest passions—writing.