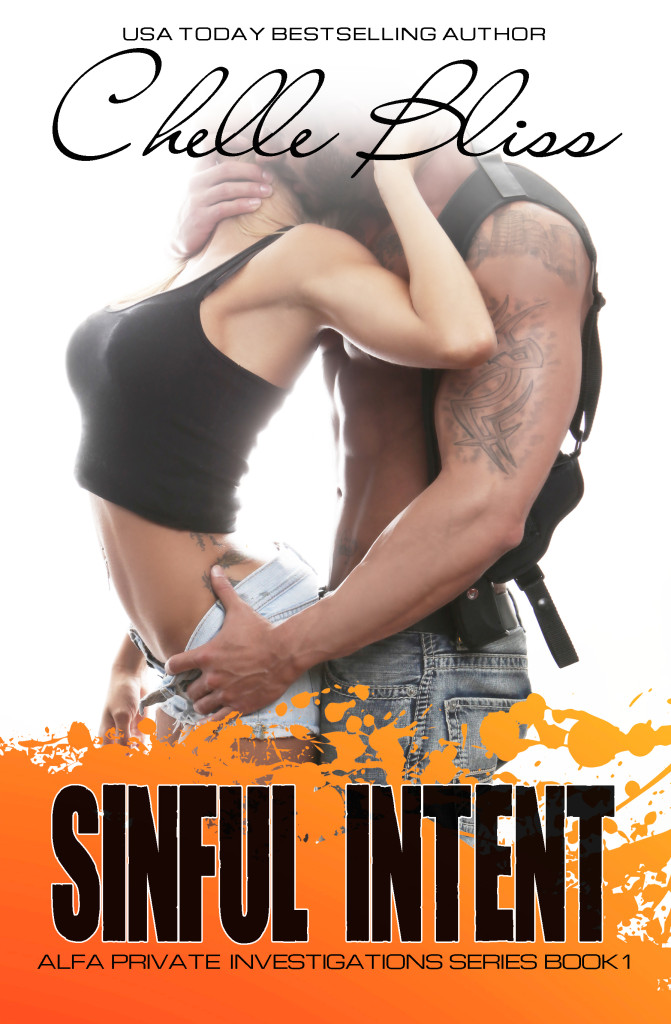 The moment I saw her, I wanted her.
I tried to resist her, but Race had other plans.
One night, in a moment of weakness, I gave in to my desires.
I still had a job to do before her world collapsed.
If I failed at finding the person behind the threats, I could lose her forever.
Temptation can be dangerous.

Chelle Bliss became a favorite author when I was first introduced to her Men of Inked series featuring one of my favorite fictional families, The Gallos. I fell hard and fast for her writing and how she easily brought you into this world that made this family so real that you wanted to crawl into the books and live there. As the series and family grew so did my love for her art of storytelling. She became an author who was able to capture all the perfect elements of love, passion, humor and a true sense of family all in the same book.  I have a love for her books and will likely enjoy anything she dips her hands into. Naturally, Sinful Intent, the first book in her newest series (and Men of Inked spin-off ::happy dance::) – ALFA Private Investigations won me over instantly. Not gonna lie to Chelle or the readers and I mean no offense or disrespect when I say this because while I understood the choice to use the name Race True, it is quite possibly my least favorite named character of all the books I’ve read by Chelle thus far. However, as I got used to the name and got a better understanding of the choice I continued on with enjoyed the story as much as I did the Men of Inked books. This book had everything you look for in a good romance/erotic romance – love, passion, friendship, mystery, action and of course family – yup, that’s right, the Gallos are back and you will definitely get plenty of updates on the happenings of their lives as well as the introduction of some new faces which I absolutely love.

Sinful Intent introduces Morgan DeLuca and the story of how he came to join ALFA PI. His story is real enough where it could be someone you knew growing up, he’s a kid from the “wrong side of the tracks” that was fortunate enough to get his life together in most ways, but now he’s trying to figure out…what next? I love how he came to join the ALFA PI family and the story that leads up to him meeting Race True.  We are introduced to Race True who becomes Morgan’s first client and after their initial meeting, it is clear they are both attracted to one another. Race suffered insurmountable loss in her life and it only made her work harder. Morgan is a distraction she isn’t sure she can afford to welcome into her life, but she feels hope when he’s around. Lines become blurred one night and their walls come down allowing the two to give in to the overwhelming need they’ve felt since their first encounter, but can they get beyond the reasons that initially brought them together or will everything fall apart before they have a chance to begin?

As much as I loved Sinful Intent, Chelle did what she does best – gives you a taste and makes you want more. I’m salivating for the next book in the series, Unlawful Desire. I am so curious about Frisco and I can’t wait for his story. This series, as with the Men of Inked series is perfect for Contemporary Romance/Erotic Romance/Erotica fans. It is the perfect blend of romance, intrigue and the steam factor, as always, remains off the charts! You won’t be disappointed!

“You’re really purdy,” she slurred with a lopsided grin, running her finger down my cheek.
“That’s it. No more drinks for you,” I said, dragging the glass away from her.
“No! I’ve only had three,” she said as she lurched forward, pulling the drink out of my hands.
“I’m enjoying myself. I’ve had a bitch of a week and I deserve to let loose a little.”
I held my hands up. “You’ve actually had four martinis, but anything you want, princess.”
Her eyes grew into little slits. “I’m not your princess,” she slurred, sounding completely adorable.
My cheeks hurt as I smiled. “I’m going to take you home now. I think you need to sleep it off.”
“Last time I checked,” she said before hiccupping, “you’re not my daddy.” A slow smile crept across her face. She scooted closer and whispered, “Unless that’s your thing.” She tried to wink, but both eyes closed, one after the other.
I leaned into her space, a breath away from her lips. “It’s not my thing, but I’m happy to act out your fantasies. But I don’t think you want to cross that line. Once you go there, there’s no going back.” I stared into her eyes.
“Oooh.” Her eyes grew wide. “Is that supposed to scare me, Mr. DeLuca?”
I didn’t move. “I’m just giving you fair warning. You’ve had a few drinks, and I won’t take advantage of that. I’m just telling you how it is.”
“You’re full of yourself.” Her warm, sweet breath caressed my lips as she spoke.
All I wanted to do was reach out, pull her face to mine, and kiss her full, beautiful lips. “I’m sure of myself and confident in my abilities, yes. That’s entirely different than being full of myself.” I licked my lips, testing her.
Her eyes dropped to my mouth as her lips parted.
“Another?” Lisa interrupted.
“We’re good,” I replied, keeping my eyes pinned to Race and waving Lisa off.
“Pfft,” Lisa scoffed, stomping away.
Race glared in Lisa’s direction. “She wants you,” she whispered.
Was she jealous?
“I don’t want her.”
“She’s a sure thing though.”
I leaned closer, leaving very little space between us. “I never liked easy.”
“All men like easy.” Her body swayed, moving so close our lips almost brushed.

Chelle Bliss is a USA Today Bestselling Author of the Men of Inked series.

She loves to write happily ever afters filled with alpha males and sexy women.

Chelle spends her days writing, chatting on Facebook, and working on her craft.

The ALFA PI series a spin off of her Men of Inked series and she’s excited
to introduce a new world of characters to readers.