From the New York Times and USA TODAY bestselling author of Where Sea Meets Sky comes a new adult novel about a young woman who becomes a nanny in Capri and falls for her charges’ bad-boy brother.

When I’m traveling, I feel like the secret to my life, to myself, to really becoming, is one step ahead. It’s in thenext destination, the next town I get lost in, the next stranger I talk to. It’s always next but never here . . .

After six months of backpacking and soul-searching across the world, Amber MacLean is flat broke. There are worse places for a twentysomething to be stuck than the Amalfi Coast, but the only way she can earn enough money for a plane ticket home to California is to teach English to two of the brattiest children she has ever met.

It doesn’t help that the children are under the care of their brooding older brother, ex-motorcycle racer Desiderio Larosa. Darkly handsome and oh-so-mysterious, the young master of the crumbling villa tests Amber’s patience and will at every turn—not to mention her hormones.

When her position turns into a full-time nanny gig, Amber grows dangerously closer to the enigmatic recluse. But can she give up the certainty of home for someone whose closely guarded heart feels a world apart from her own?

Wow, Racing the Sun is one of the most beautiful books I’ve ever read. I fell in love and I fell hard. I was hooked from the very first page and I didn’t even realize how quickly I went through the book until I glanced at my kindle and realized I was 91% in. I still have no idea how that happened. I mean I dove in hard and nothing else around me existed, but a part of me still grew sad knowing the story was so close to the end. I loved every complicated bit of this story. The romance is that once in a lifetime love that leaves you swooning and hoping for a HEA. I felt every heartbreak and every joy. The accomplishments each character experience make you connect with them in a unique way and you begin to feel as though you are experiencing their growth with them. Karina Halle’s expressive writing draws you in and brings this story to life in a way that made it so real, it was heartbreaking at times, alluring and it will definitely leave you with a bit of wanderlust.

The story is beautiful and there are so many different layers. It is a love story where you begin to fall in love with not only the romantic aspect of the story, but also with each characters growth, the travelers discoveries, their woes, but every complication creates a perfect story that leaves you in awe. I felt every word and the descriptive elements made me feel as though I was in a foreign city experiencing every new revelation with them. I sat and read and could feel and see clearly even the tiniest of details.

Racing the Sun tells the story of Amber MacLean who finds herself broke after months of travel. She secures a job as an English tutor for two children, but the families complicated story leaves her wondering if she’s cut out for the job. Amber buckles down and rises to the challenge, but when she begins to take on more responsibility and finds herself growing fonder of the brooding older brother Derio, things get beyond complicated. She’s falling, but Amber’s heart is not the only one that remains guarded. Their time together draws them closer allowing each of them to slowly open up, but will the past haunt them or will this be nothing more than another stop on Amber’s world tour?

Beautifully romantic, exotic and complex Racing the Sun will leave your heart racing and keep you utterly mesmerized. You’ll fall hard for Derio, Amber will amaze you and you’ll love every minute of it. I’m already counting down the days until Karina Halle’s next release! 5+ exceptional stars for an extraordinary book! This is a must read! 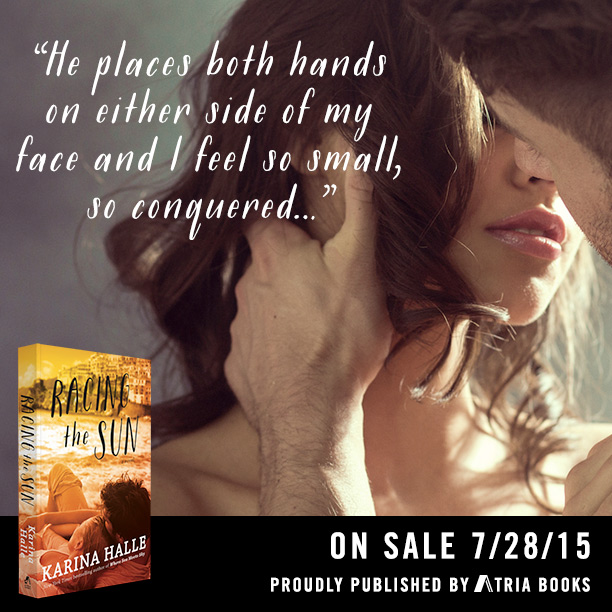 RACING THE SUN by Karina Halle

Karina Halle is the New York Times bestselling author of Where Sea Meets Sky, The Pact, Love in English, and other wild and romantic reads. A former travel writer and music journalist, she lives on an island off the coast of British Columbia with her husband and her rescue pup, where she drinks a lot of wine, hikes a lot of trails, and devours a lot of books.

Atria Indie Authors and Karina Halle are giving away:

“Atria Books announced today a four-book world rights deal with #1 New York Times bestselling author Abbi Glines. The first three books in the runaway new adult bestselling Too Far series, FALLEN TOO FAR, NEVER TOO FAR and FOREVER TOO FAR, will be published as eBooks in January 2014 with trade paperback editions to follow. Atria will also release a never before published novel, RUSH TOO FAR in eBook and trade paperback simultaneously in May 2014. The book will re-tell the story of Fallen Too Far from hero Rush Finlay’s perspective.

Fallen Too Far, Never Too Far, and Forever Too Far, originally self-published by Abbi Glines, established her as one of the foremost authors of the new adult genre, selling over 400,000 eBooks each, with Fallen Too Far reaching the half a million mark. These books launched the Rosemary Beach series, which follow the romantic entanglements within a group of best friends in a small resort town on the Gulf Coast.

Judith Curr, President and Publisher of The Atria Publishing Group says, “We’re so thrilled to be the exclusive publishers of Glines’s Rosemary Beach series and to have the opportunity to work with her on building a long term career.”

Abbi Glines is the #1 New York Times, USA Today, and Wall Street Journal bestselling author of the Sea Breeze, Vincent Boys (both published by Simon Pulse), Rosemary Beach, and Existence series. A devoted book lover, Abbi lives with her family in Alabama. She maintains a Twitter addiction at @AbbiGlines and can also be found at Facebook and AbbiGlines.com.”

To read the prologue of RUSH TOO FAR, visit: http://issuu.com/atriabooks/docs/rushtoofar_excerpt