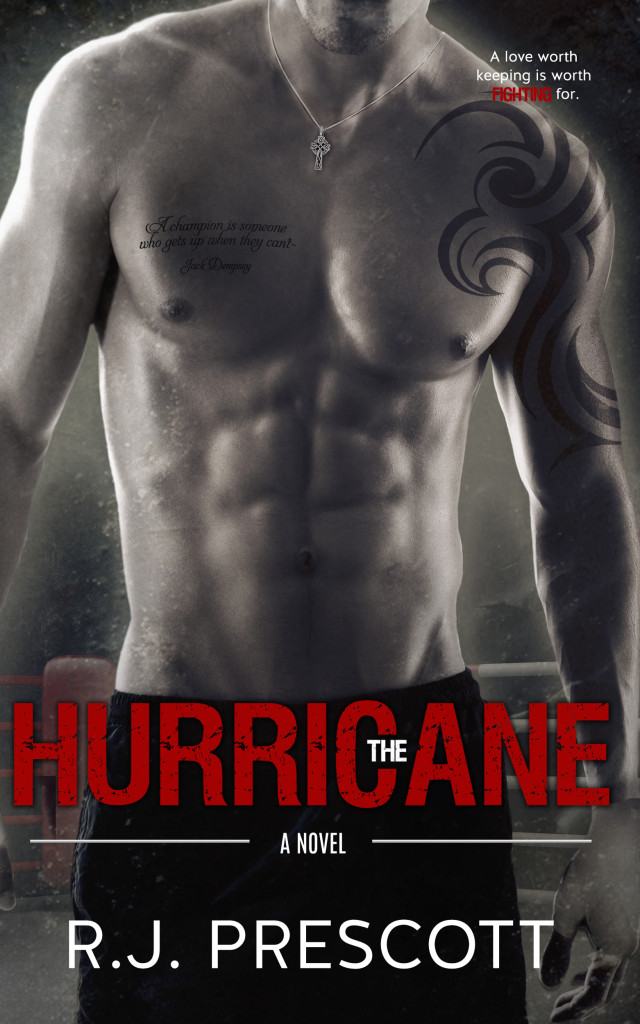 Emily McCarthy is living in fear of a dark and dangerous past. A gifted mathematician, she is little more than a hollow, broken shell, trying desperately to make ends meet long enough to finish her degree. Through an unlikely friendship with the aging, cantankerous owner of an old boxing gym, Em is thrown into the path of the most dangerous man that she has ever met.

Cormac “the Hurricane” O’Connell is cut, tattooed and dangerous. He is a lethal weapon with no safety and everyone is waiting for the misfire. He’s never been knocked out before, but when he meet Em he falls, HARD. Unlike any other girl he’s ever met, she doesn’t want anything from him. Just being around her makes him want to be a better person. They are polar opposites who were never meant to find each other, but some things are just worth the fight.

He grabbed my hand and pulled me to a stop facing him. He moved in so close that our noses were almost touching.

“Tell me you can feel this. I need to know I’m not the only one,” he spoke gently.

“I feel it,” I whispered, staring at the ground. “But I’m not doing anything about it. Everything that you make me feel is completely overwhelming, and I can’t give you what you need, not even close. I don’t want to talk about why I am this way, but just offering you friendship is a big deal for me right now.”

I finished my rant feeling more desperate than ever. This big, strong, beautiful, terrifying man had feelings for me, but seriously how long would they last? I was getting better, but I was afraid of my own shadow most of the time. I was small, weak, and lacked any self-confidence. O’Connell was dangerous, addictive, and so sexy that I was consumed by lust every time we were in the same room together. He used his body like a weapon and the danger attracted women like a magnet. With that many women, all vying for his attention, what little charm I held for him would fade like mist in the morning sun. If I let him in, he had the power to break what little of me was left whole when I couldn’t keep him.

Reaching out one giant, scarred and calloused hand, he tucked a wayward curl behind my ear. He lifted my chin with his knuckle forcing me to meet his gentle gaze. He looked so happy and intense right now that I could feel my eyes welling up. I never thought that anyone would ever look at me like that.

“I know I’m scary and loud. I’m fucked up, and I’m gonna fuck up with you a lot because I’ve never done this before. I don’t date girls, I fuck them and walk away because that’s what they expect. It’s all they think I’m good for. I’m not smart like you, and I know I don’t deserve you. Right now, I’m dirt poor, but one day, I’m not gonna be. I will fight to make something better of myself, to be someone better. Someone you can be proud of. If you need time, then I’ll give you time. If you need friendship, then I’ll give you friendship. But you’re mine, and when the time is right, when you’re ready, I’m coming for you.”

I nodded, so close to tears I knew that if I tried to speak, I’d completely break down. I swallowed hard, and the tears fell anyway. O’Connell wiped them away with his thumb and gently pressed his big firm lips to mine. Just like that, my fears were forgotten. The kiss was gentle, but fireworks exploded all over my body. It was like he had invigorated every cell with life. The touch of his lips wasn’t enough to satisfy, only to feed my addiction. I knew in my head that I wasn’t ready for a relationship, but my body wanted to drown in the revelation that it could feel something other than cold, hunger, and pain. It was a kiss both chaste and pure and everything I hoped that my first kiss would be, because everything I gave to him, I gave freely. Slightly out of breath, our lips parted, and he rested his forehead back against mine.

“I’m gonna give you the fuckin world, baby,” he whispered against my lips.

He kissed me again quickly and grinning like a kid, threaded his fingers through mine.

“You know friends don’t hold hands,” I whispered, knowing that there was no way that I was letting go first.

“Huh,” he grunted. “Me and Kier hold hands all the time.”

99 PENNIES FOR A LIMITED TIME!

R.J. Prescott was born in Cardiff, South Wales and studied law at the University of Bristol, England. Four weeks before graduation she fell in love, and stayed. Ten years later she convinced her crazy, wonderful fire fighter husband to move back to Cardiff where they now live with their two equally crazy sons. Juggling work, writing and family doesn’t leave a lot of time, but curling up on the sofa with a cup of tea and a bar of chocolate for family movie night is definitely the best part of R.J. Prescott’s week. “The Hurricane” is her debut New Adult Novel.