No Apologies by Sybil Bartel 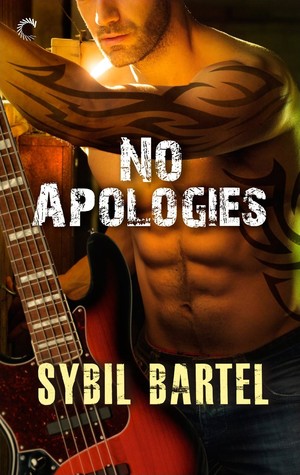 Hard-edged rocker Graham Allen has it all. He’s flush with cash from playing bass in a band by night and restoring classic cars by day. And there are plenty of women willing to share his bed for a night, complication-free. Perfect, because if there’s anything he learned from his past, it was to never get attached—to anything. So when bartender Carly Sullivan flashes her innocent smile, Graham isn’t prepared for what happens next.

Two rules, that’s all Graham has—never apologize and never fall in love. He knows Carly is everything he should avoid. Cheerful and sweet, she has “relationship” written all over her. But Graham can’t stay away from her probing questions and concerned blue eyes.

When Graham discovers Carly is hiding a crushing secret, he’s prepared to risk it all. Until in one single moment, everything changes and Graham’s past threatens to collide with his future. His life is crumbling down around him, and soon no apology in the world can save him.

He should’ve known to walk away.

Carly opened the door, all smiles. “Missing something?”

Yeah, you. My relief at seeing her smile was instant but I gave her a hard time anyway. “There better not be a scratch on it.”

She shook her head. “Have a little faith.”

“You forget I’ve seen you drive.” Like a bat outta hell.

I followed her, admiring the view.

“Want some coffee? I just made some.”

Her apartment smelled amazing, like cinnamon and fresh bread. I remembered I hadn’t eaten. “Yeah, sure. Smells good.” I followed her into the kitchen and looked out one of the windows. The Ducati was parked by a garage in back.

“I’m making muffins. They’ll be ready in ten minutes. Looking for the bike?”

“Checking to make sure it’s in one piece.”

“Would I destroy a machine like that? Jeez!” She looked affronted then busied herself getting coffee.

“I have no idea.” Women were capable of crazy shit.

She handed me a mug. “Well, I wouldn’t, but you might need a little gas.” She winked and set her small kitchen table for two.

“I don’t think I want to know where you went.”

I got her full-blown smile. “She opens up nicely on the highway.”

If I hadn’t seen her ride, I might’ve been having a heart attack right now. “Do you have any self-preservation?” I’d bet a month’s paycheck she didn’t go the speed limit.

Her face turned serious. “Lots, that’s why I was careful not to drop the bike.”

That statement, the look on her face, I couldn’t let it slide. I set the coffee on the counter and grabbed her hand. She flinched but I held tight and lowered my voice. “You think a bike’s more important than you?”

Sybil grew up in Northern California with her head in a book and her feet in the sand. She used to dream of becoming a painter but the heady scent of libraries with their shelves full of books about wistful summer days and first loves drew her into the world of storytelling. Her true literary love is the New Adult genre but really, any story about a love so desperately wrong and impossibly beautiful, makes her swoon.

Sybil now resides in Southern Florida and while she doesn’t get to read as much as she likes, she still buries her toes in the sand. If she’s not writing or fighting to contain the banana plantation in her backyard, you can find her spending time with her handsomely tattooed husband, her brilliantly practical son and a mischievous miniature boxer who stole her heart. 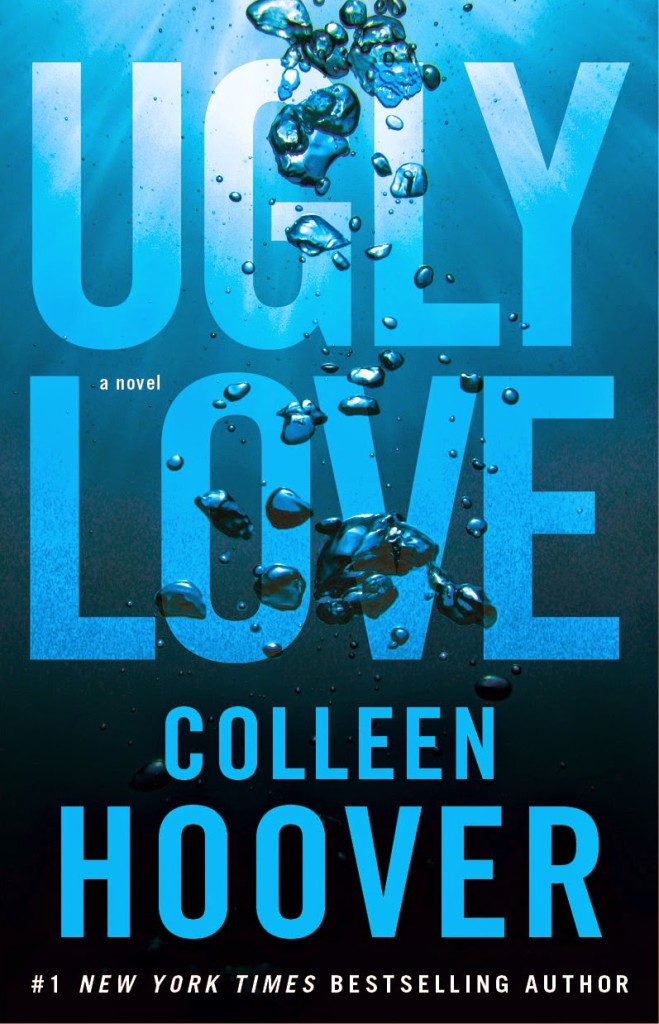 When Tate Collins meets airline pilot Miles Archer, she doesn’t think it’s love at first sight. They wouldn’t even go so far as to consider themselves friends. The only thing Tate and Miles have in common is an undeniable mutual attraction. Once their desires are out in the open, they realize they have the perfect set-up. He doesn’t want love, she doesn’t have time for love, so that just leaves the sex. Their arrangement could be surprisingly seamless, as long as Tate can stick to the only two rules Miles has for her.

Never ask about the past.
Don’t expect a future.

They think they can handle it, but realize almost immediately they can’t handle it at all.

Hearts get infiltrated.
Promises get broken.
Rules get shattered.
Love gets ugly.

As many of you already know, I’m a big Colleen Hoover fan. I have fallen in love with every single book she has published and Ugly Love is no exception. This book may actually be one of her best…nope I can’t even say that, this book is one of the best works I’ve ever read. Yup, I said it, not just HER best work, but one of the best books I have EVER read.  In all honesty every one of her books is equally amazing. I couldn’t rank them if I tried. All have been 5 stars and although I am inclined to say Ugly Love is also five stars, I simply can’t. Ugly Love isn’t like previous works by CoHo, it’s…different, but it is amazing in it’s own right and because of this, it is ranked in a category of it’s own. 5 stars would be an understatement so I’ll just say this book is a magnificent and brilliant work of fiction that will have you clinging to your kindles, nooks or books for dear life until the very last pages. It is a book that will shatter your soul and take the broken pieces to create a stained glass window around your heart. It will take you on one of the most elaborate roller coaster rides of your life…and you’ll never be the same again.

I fell in love with Miles…no, “I flew” in love with him. He is probably my favorite male character that Colleen has ever created and his story, while incredibly heartbreaking will make you love him beyond belief.  I cried…yes I said I cried, but is that really a surprise? Colleen seems to be the only author that has been able to bring me to tears time after time with her stories. This book, however, is deeper than most when exploring the many different facets of relationships and how hard someone can try to protect their heart before it all comes crashing down.

They hold you under.

You look up and think. I wish I were up there.

Makes you hate it all.

Makes you realize that all the beautiful parts aren’t even worth it. Without the beautiful, you’ll never risk feeling this.

So you give it up. You give it all up. You never want love again, no matter what kind it is, because no type of love will ever be worth living through the ugly again.”

This book is told in dual perspectives (mostly) and goes from present day to past and back again. We discover all the things Miles is keeping from Tate piece by piece like an intricate puzzle. We also begin to understand the many things about Miles past that have broken this beautiful man beyond repair and why he is so reluctant to love. We are in no way prepared for the final blow that will undoubtedly shatter you. This is probably one of the most shocking and heartbreaking moments I’ve ever read and my heart wept for Miles…and Tate. I wasn’t fully prepared for what was to come and I feared the direction this book would take after the discovery. How could these two possibly overcome this revelation? I won’t give away anything major, but know this book is brilliant and Colleen Hoover is yet again…brilliant.

Tate an RN pursuing her Masters in Nursing moves in with her brother Corbin. A pilot. He happens to be friends and works for the same airline as Miles. Tate and Miles introduction is rocky from the start, but there is a magnetic reaction that is so strong my kindle sizzled. These two have incredible chemistry and although they agree to participate in a no strings attached sexual relationship. Their hearts have other plans. Tate is a character you’ll love, but you will cry for her and every decision or indecision she makes. I found her to be real and her experience to be quite real when considering love and what a person will endure to simply keep someone in their life even when the rules are clear. For me, Miles is one of my favorite characters, but The Cap is another. I fell in love with him since his introduction. He simply is a necessary part of this book. His role and sometimes odd, always entertaining words of wisdom were the perfect balance to an otherwise passionate and heartbreaking novel.

Ugly Love is intense. It is a book that is both raw and deep. It cuts to the very core of your being and leaves you breathless. This book continues to highlight the genius that is Colleen Hoover and her amazing ability to weave words like no other. It is intricately created in a way that draws you in and tears you apart piece by piece. It is a book that will stay with you long after the final pages are read. This book is probably the best I’ve read in 2014. I recommend for all readers 17+ as the content is mature. Don’t walk into reading this with expectations, there is no amount of planning that can prepare you for this experience, but I guarantee you’ll never be the same again.

Two thumbs up, 10 fingers and toes!

ABOUT THE AUTHOR: Colleen Hoover is the #1 New York Times bestselling author of Slammed, Point of Retreat, This Girl, Hopeless, Losing Hope, Maybe Someday, and Finding Cinderella. She lives in Texas with her husband and their three boys. Please visit ColleenHoover.com.

Connect with Colleen on Social Media

Check out these other amazing titles by Colleen Hoover: